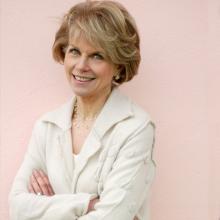 Les Parisiennes is a story about women’s lives during the dark years of Nazi occupation and beyond and includes British and American women caught in Paris as well as native born resisters who were eventually sent to camps They included couturiers and jewelers some of whom flourished in wartime as well as actors, singers, night club dancers and housewives.

The lecture opens with a magnificent circus ball held by Elsie de Wolfe at the magnificent Villa Trianon, a chateau in the grounds of the Palace of Versailles. Many of the guests could not believe that war was imminent. The lecture ends with Christian Dior’s lavish new look in 1947 as well as a perfume, Miss Dior, named after his sister Catherine, a member of the resistance, who had only just survived a prison camp and never wanted to talk about her experiences.

Profile
Anne Sebba is a biographer, historian and author of nine books, often biographies of powerful women. One notable book was “That Woman”, a biography of Wallis Simpson. She is an experienced lecturer and broadcaster who lives in Richmond.