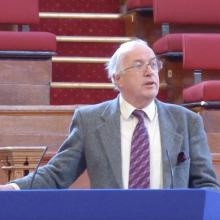 The mosaics of Ravenna were created during great political turmoil. In the fifth and sixth centuries, invaders played havoc with the western Roman Empire. In spite of this, artists and church leaders created churches of astonishing beauty. This lecture looks at Galla Placidia, San Vitale and the Orthodox Baptistry. It pays particular attention to Sant’ Apollinare Nuovo, the Arian baptistery and Sant’ Apollinare in Classe. The clash between Arian and Orthodox Christianity was reflected in the mosaics.

Profile
Christopher has lectured at the National Gallery, the Courtauld Institute, King’s College, London, Westminster Abbey, and the University of Rikkyo in Japan, and at churches and cathedrals throughout England and in Italy. He was until recently Bishop of St Albans and a member of the House of Lords. He has an MPhil and PhD in Art History from the University of Leicester. He was created Visiting Professor in Christian Ethics in the School of Medical Sciences at the University of Surrey, and has also been awarded two honorary doctorates. He is an honorary citizen of Fano, Italy.